I bought the girls a present today. It was meant to be a statement of how much I love them since it is the antithesis of everything I want my children to aspire to and they know I loath them. However this is what they have been coveting for months so I decided to surprise them with these: 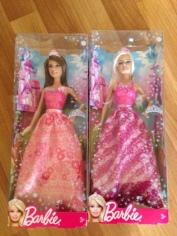 This really isn’t worthy of comment in itself. But what is interesting to me is the girls’ reactions to the dolls. Firstly they were both very happy. So that’s great and I’m pleased I bought them the revolting pink plastic monstrosities.

Bunny got out any other dolls of a similar size and type and lined them all up in a row. As she has one more doll than Kitten she did some loud counting every now and again to hammer that message home for her big sister. She collected all the dolls’ accessories and put them in a row too. She plaited all their hair so they looked the same and swapped clothes round then put them all back again repeatedly. Repetitive play but she was content in her own little world and Bunny would have carried on like this for hours.

Kitten felt anxious about her doll. She has said ‘I wish…’ many times since I gave her the doll. I wish I had more bobbles…had more dolls…the shoes were a different colour. She has asked her little sister Is my doll prettier than yours? Are you jealous of my doll? Do you wish you had my doll? For Kitten life is a battle to be won. My girl constantly feels she is not good enough. She doesn’t deserve nice toys, or clothes or love. She had 4 years to learn this before she came to live with me. The anxiety about this permeates everything she does. So she is trying to reassure herself that her doll is the best; really she is trying to reassure herself that she is the best while she has a pit in her stomach that tells her that whatever she says and does she will never be good enough. Perhaps also the fact I had bought her something she knows I don’t like scared her a bit. Being loved that much is very scary to Kitten!

Kitten quickly dysregulated. The doll play became very physical and she drew her little sister into this, skilfully trying to control everything Bunny said and did. Dolls have been slammed into the floor and into the furniture and into each other. Bunny bought in to the battle for control. If Bunny has an idea fixed in her head she finds it hard to swerve from it. If pushed too far she will meltdown on an epic scale. And so we have had dysregulated chaos from both girls.

I shouldn’t have let it get this far. I usually step in to prevent things escalating. So I will attempt to re-establish calm for Bunny and Kitten as they are unable to self calm. They’ve had bananas and warm milk for a snack. I’ve brought their Lego out and they’re playing separately. Bunny has her dummy in and is doing a lot of rocking as she plays. Kitten has her weighted lappad on her knee and is sighing a lot! We have something soothing to listen to while we play. This will be a work in progress till bedtime and beyond. Kitten is VERY angry. Bunny is shell shocked.

Do I regret buying the offending pink items? No not at all. I hope and pray that Kitten and Bunny will look at their Barbies sometimes and remember how much their mummy loves them.

Keeping Calm While Daddy is Gone

Our Story of living life and loving each other!

Our adoption journey with Bubble and Squeak

An adoption blog by two mums and a big brother to adopted little sis - the good, the bad and the plain ugly

Embarking alone on an adoption adventure in the UK

A hermit, addicted to peanut butter & lover of bubbles in all shapes and sizes

Life with Katie and Pip: Our Adoption Story

Tales of a Foody Mama

Living with my Bees

All Aboard The Trauma Train